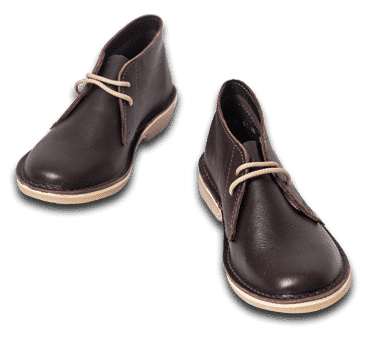 Many of our leather products at

are manufactured from Kudu leather, sustainably sourced in Southern Africa and is a by-product from the meat industry. The kudu population in South Africa and Namibia are thriving, due to the absence of natural predators and ever-increasing tourism.

Kudus are the second largest antelope with spectacular, spiralled horns, up to 1.8m in length. Their coats are short haired, tawny-brown, grey-brown to rusty-brown, with 4 to 15 distinctive vertical white stripes on their backs and flanks. Despite their size of up to 300kg, kudus are accomplished jumpers, clearing 3m with a running start and 2m from standing position.

Kudu leather has been used for footwear in Africa for over two thousand years, due to its unbelievably hard-wearing qualities, softness and a subtle sheen which helps to illuminate the rich, pebbled texture of the hide. Due to the grazing habits of the kudu, mainly amongst thorn trees and predators such as leopards, lions, African wild dogs, hyenas – Kudu leather is one of the most unique options as it features some scratches and scars – which immediately gives the leather its inimitable character to produce one-of-a-kind boots and shoes.

Even though Kudu leather is tough and strong it ages gracefully thanks to its malleable composition. With enough wear, Kudu leather develops a rich, rugged patina while you add your own battle scars next to those naturally formed in the African bush. When treated correctly, Kudu leather is soft to the touch, kind to your feet with slipper-like comfort and is extremely stylish. Kudu leather is also a popular material for jackets, bags and upholstery.

A lot of people wear Kudu footwear as part of their formal wear, but with the range of beautiful Kudu vellies and boots on sale from

, your Kudu leather shoes can be dressed up or down and you are sure to look stylish and feel comfortable no matter the occasion.